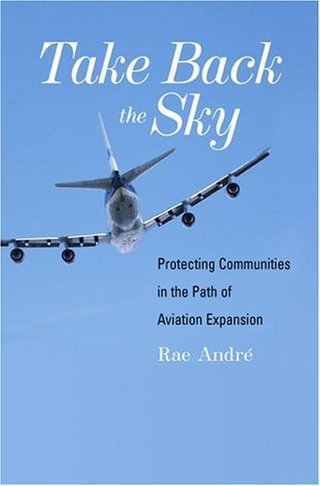 Take Back the Sky:
Protecting Communities in the Path of Aviation Expansion

TAKE BACK THE SKY (Sierra Club Books, 2004; iUniverse 2009) investigates the problems faced by communities in the path of aviation expansion, and argues that the United States should develop a multimodal transportation system that is both strategically diverse and environmentally sound. High speed rail today takes people from Paris to Marseille--the distance from Boston to Washington--in just three hours. Why not in America?

"We have spent far too much time in this country fighting endless battles over airport expansion and far too little investing in the kind of high-speed rail that can solve the problem. Rae Andre is one of the first to address this issue and she does it well."

"This is not a book to relax with: optimistically titled, yet detailing failures of communities to defend basic rights as they are assured by authorities that developments they oppose are required by 'the market.' Its arguments are extremely parochial, yet of universal relevance in western democracies. . . . The cut-throat power of laissez-faire capitalism and high-powered cronyism portrayed in this well-researched and documented book is chilling and a wake-up call for those Panglossians who believe we live in the best of all possible (democratic) worlds."

"Perhaps the most useful facet of the book is its clear prose in distilling the environmental costs of airports to the communities in which they are situated including air pollution, climate change, ground pollution, and an entire chapter on the failure of the U.S. government to account for the psychological and physiological effects of noise pollution in any meaningful way. Andre makes a compelling case that all of these environmental impacts are far from minor..."

"For too long the insatiable demands of commercial aviation have been met without protest by governments which are anxious not to hinder the progress of an industry with such a high economic and political profile. This book shows us how local communities in the US take on the airline and airport industries and sometimes even prevail...The question facing all opponents of unlimited airport expansion is...can a country like the US, which more or less abandoned passenger rail travel in the 1950s in favor of the airlines, return to it as a matter of national policy in response to the need for a more environmentally sutainable transport system?"

"Noise and carcinogens rain down on communities, destroying the quality of life. The aviation industry promotes the noisiest, dirtiest and most inefficient mode of transportation and billions of taxpayer dollars each year subsidize it. It is time to take back our skies, and our dollars, to invest in transportation that is quieter, clearner, more efficient and more community friendly. Rae Andre's blueprint for more livable communities and more sustainable transportation alternatives is a must read for anyone concerned about peace and quiet.